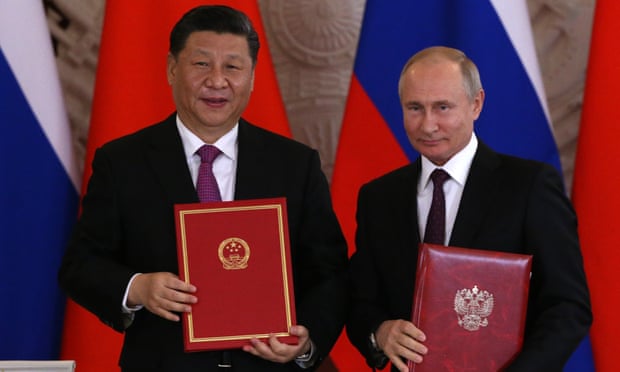 Chinese president Xi Jinping and Russian counterpart Vladimir Putin met at the Grand Kremlin Palace in Moscow on Wednesday. The Huawei deal was signed on the sidelines of their summit. Photograph: Mikhail Svetlov/Getty Images

Huawei, the Chinese technology company considered a security threat by the US, has signed a deal with Russian telecoms company MTS to develop a 5G network in the country over the next year.

The agreement was signed on the sidelines of a meeting between Chinese leader Xi Jinping and Russian president Vladimir Putin in Moscow.

The deal will see “the development of 5G technologies and the pilot launch of fifth-generation networks in 2019-2020”, MTS said in a statement on Wednesday.

Quoted in the statement, Huawei’s Guo Ping, one of the company’s chairmen on rotation, said he was “very happy” with the agreement “in an area of strategic importance like 5G”.

At a Moscow meeting between Putin and Xi, the Chinese leader called his Russian counterpart his “close friend”, noting that they had met nearly 30 times over the past six years. The trip is Xi’s eighth to Russia since 2012.

“We will strengthen our mutual support on key issues,” Xi said, sitting next to Putin in an ornate Kremlin hall.

Moscow’s ties with the US have declined sharply over the Ukrainian crisis, the war in Syria and the allegations of Kremlin meddling in the US 2016 presidential elections, while China is engaged in a spiralling trade war with Washington.

“Protectionism and unilateral approaches are on the rise, and a policy of force and hegemonism is increasingly taking hold,” Xi said.

Huawei has been in turmoil since May, when the Trump administration banned US companies from selling high-tech equipment to Huawei over suspicions it was spying for Beijing.

Experts say the US decision, which is to come into force within three months, threatens the survival of the company, which is highly dependent on US chips for its phones.

Several companies have already distanced themselves from Huawei, including Google, whose Android system equips the vast majority of smartphones in the world.

Huawei’s reported potential involvement in Britain’s 5G network has proved politically sensitive and Theresa May’s government insists no decision has been made on the issue.

Agence France-Presse and Associated Press contributed to this report

Thank You to JM for sharing this article with us at Zero5G!