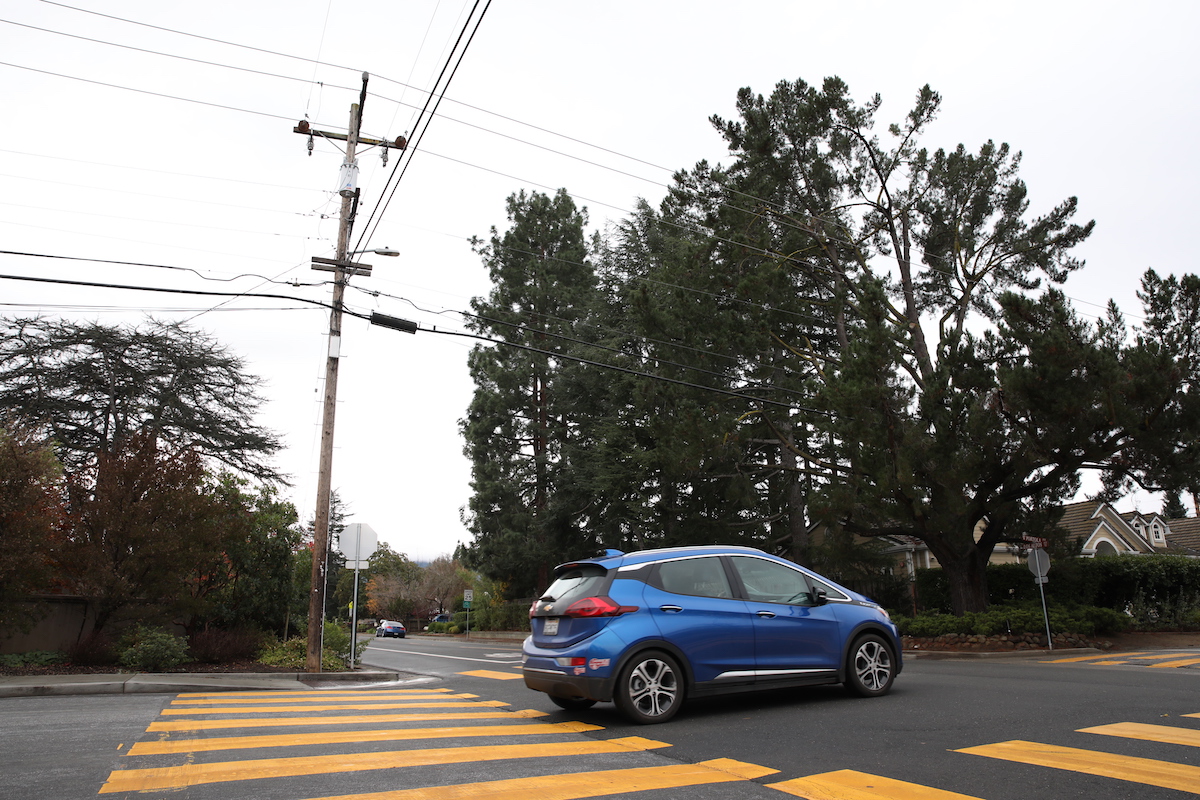 Megan V. Winslow/Town Crier Between March and May of this year, AT&T and Verizon submitted permit requests to install a combined 13 cell nodes across the city of Los Altos. When their applications were denied in September, they appealed the decision. The Los Altos City Council had its final say Tuesday (Dec. 18) when it rejected all of the cellular providers’ appeals.

The discussion, continued from the Oct. 29 meeting, boiled down to Verizon and AT&T representatives claiming that coverage and capacity gaps existed in the city, and the council not believing that was the case.

According to a staff report written and presented by Jim Sandoval, the city’s director of engineering, Los Altos received the applications between March and May of this year requesting approval to place wireless telecommunications facilities on existing or replaced utility poles in the public right-of-way in locations across city limits. All applications, Sandoval explained, were deemed incomplete due to missing documents.

On. Aug. 5, after a lengthy discussion and pleas from residents to keep 5G technology away from schools and residential zones especially, the city council passed an emergency ordinance that addressed where those facilities should be posted within the jurisdiction. This meant that the ordinance and subsequent design standards would be applied to all pending permit applications, including the 13 filed by the cell providers. Those representatives were notified within a week, Sandoval wrote in the report.

Approximately two weeks after the ordinance was passed, AT&T submitted a letter arguing that the ordinance and design standards should not apply to its applications and proposed that the Federal Communications Commission grant the city more time to consider the applications with the regulations previously in place. Verizon did not submit a letter in response.

City Manager Chris Jordan denied all of the applications shortly thereafter, according to the staff report, and delivered notice of those denials Sept. 11 and Sept. 17.

The letters explained reasons for denial. Verizon’s requested site at 155 Almond Avenue failed to meet two findings required in city code. It did not meet the design and siting guidelines because it is within 500 feet of a school (Los Altos High School) and it failed the test of being designed and located to achieve “compatibility with the community to the maximum extent reasonably feasible.”

Verizon and AT&T had the opportunity to file appeals within five days of the decision, according to the ordinance language, which they did. The city scheduled an administrative public hearing, which property owners and residents within 1,000 feet of the proposed project areas were notified of two weeks prior.

Days before the public hearing, the city received supplemental documents from Verizon and AT&T. When asked Oct. 29, both companies agreed to delay the hearing so that city staff had adequate time to review the new information. In reviewing the documents, staff found Verizon’s package was complete and AT&T’s was not, Sandoval said. With additional materials presented, AT&T’s package was deemed complete Dec. 4.

A QUESTION OF CREDIBILITY

Council members were relieved to hear that neither provider intended to rollout 5G in the city in the near future. When they asked for guarantees of a period of time that they could rely on 4G being the highest level of network, neither Verizon nor AT&T representatives would provide a date.

“I can’t put a time horizon on that, but I think there’s a lot of misinformation about what 5G means,” AT&T program manager Marc Grabisch said. “5G is really just a software update and how our equipment will handle the limited resources that we have available through the spectrum.”

Councilwoman Lynette Lee Eng and a handful of residents asked why Verizon and AT&T couldn’t just use the infrastructure they already have and increase the spectrum to accommodate service to more devices. Engineers from both companies replied that spectrum is not something a provider can just scoop up – that’s something assigned by the government.

“Every year we see the demand of data double,” said Brian Ung, principle design engineer for Verizon, after explaining that the downtown Mountain View macro facility that served by the Almond Avenue was exhausted more than a year ago because of this trend. “When we have spectrum, that is our resource. It’s a finite resource. At some point we ran out. The only way to do this is to get more resources, which we don’t have, or build small cell (facilities) to offload the capacity.”

Although studies on the impact of radio frequency on one’s health is inconclusive, several residents chose to use their time during public comment to speak of their fear of potential emissions. Sacramento-based Dr. Jerrold Bushberg, speaking on behalf of Verizon and the review he did of the RF analysis done by the provider, explained that the facility less than one half of 1% of the maximum public exposure standard enforced by FCC standards.

Much more dangerous than frequency emissions from small-cell facilities is the exposure that comes from cell phones, he added. The further away from facilities cell phones are, the higher they are turned up and the more severe the emissions have the potential to be, Bushberg explained. He argued that installing more small cell node equipment atop and to the sides of utility poles would actually benefit people’s health because they would be closer to a wireless facility.

Most residents spoke against installing the small cell node facilities, though a few did mention having poor cell service for decades. By removing residential areas from accepted locations to place small cell sites, resident Bruce Smith alleged, the council was denying its citizens from a vital resource because “Los Altos is one big residential area.”

Verizon and AT&T agreed, as they both used prohibition of service as an exception that could and should be granted to them on the basis that they need to fill “significant gaps.” Verizon went as far as to incorporate maps drawn up by a cartographer from San Jose State University that depicted areas considered off-limits in the emergency ordinance: 91% of the town.

All five councilwomen conveyed that relying on data supplied by the companies was a gamble, and that the data was lacking. Following a failed motion by Councilwoman Neysa Fligor to allow two of the small cell nodes around Smith’s home, the council unanimously voted to deny all 13 appeals and cited insubstantial evidence as the reason.

*Z5G Editor’s note: Scientific Research ( > 28,657  publications) on adverse bio-effects of radiofrequency microwave radiation (RF– MWR) is well established, not inconclusive, as was incorrectly stated in the article above.

—- Link To The Science at Environmental Health Trust

— Link to 28,657 publications and 6,379 summaries of individual scientific studies on the effects of electromagnetic fields.

— Link To Scientists For Wired Technology

Thank you to SC for sharing this article with us at Zero5G!