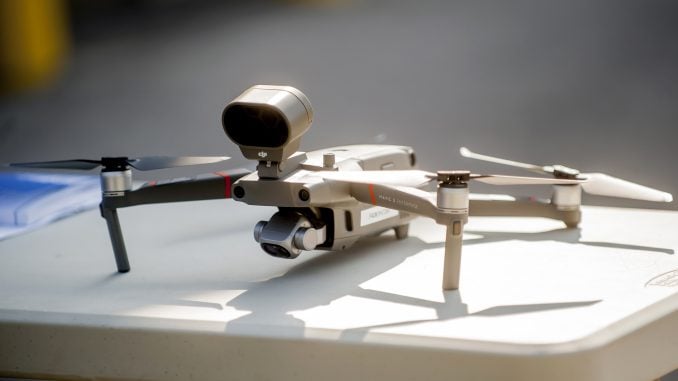 A police drone is shown in this Sept. 2019 photo. (Bac Totrong/Daily News via AP)

RALEIGH – The National Science Foundation (NSF) announced last week that the third location for its Platforms for Advanced Wireless Research (PAWR) program will be in the heart of North Carolina, in collaboration with NC State and an industry consortium of 30 networking companies and associations in the area. NSF is supporting the development and deployment of a new PAWR platform primarily based in Raleigh and Cary – named Aerial Experimentation and Research Platform for Advanced Wireless (AERPAW) – that will power research on wireless communications, focusing on new 5G network technology for drones, or “unmanned aerial systems (UAS),” and ground mobility at a regional scale.

According to a statement from NSF, “The goal is to accelerate the integration of UAS into the national airspace through new advanced wireless capabilities, while leveraging UAS to advance wireless communications.”

“[This] platform will enable significant research into the wireless communications capabilities necessary for mobility systems such as those involving ground vehicles and autonomous drones,” said Erwin Gianchandani, NSF Acting Assistant Director for Computer and Information Science and Engineering. “By enabling experiments that consider three-dimensional, highly mobile, and diverse scenarios, AERPAW will be critically important for enhancing wireless networking capabilities in our communities, and for furthering the development of innovative new applications that will improve civic services and citizen safety.”

AERPAW will be a first-of-its-kind aerial wireless experimentation platform with the goals of accelerating the integration of UAS into the national airspace and of enabling new advanced wireless features for UAS platforms, such as flying base stations for rapidly deployable wireless connectivity. As part of this effort, AERPAW will develop a software-defined, reproducible and open-access advanced wireless platform with production-like networking and experimentation features spanning 5G technologies and beyond.

The AERPAW platform in Raleigh and Cary joins existing PAWR testbeds POWDER-RENEW in Salt Lake City and COSMOS in New York City, all of which are targeting early-stage research in next-generation wireless devices, techniques, protocols and services. These platforms are designed to accelerate the development and commercialization of promising technologies, ensuring continued U.S. leadership in wireless communications while also preparing the emerging workforce for new job opportunities in the digital economy.

The creation, development, deployment and initial operations of the PAWR research platforms are overseen by the PAWR Project Office (PPO), which is funded by NSF and is run by US Ignite, Inc., and Northeastern University. The PPO works closely with NSF and the PAWR Industry Consortium to manage this $100 million public-private partnership. NSF has committed $50 million in cash toward the research platforms over seven years and expects to announce the development and deployment of one additional platform next year. The 30-member PAWR Industry Consortium, consisting of equipment vendors, device manufacturers and wireless carriers, has committed $50 million in cash and in-kind contributions that include equipment, expertise and human resources.

The press statement indicated that the NSF’s investment in the PAWR program is part of a broader strategy to support smart cities and communities. These research platforms will help to shape the future of wireless networks that will serve as the foundation for critical applications and services in our nation’s neighborhoods and municipalities.

Potential outcomes from research on the AERPAW platform may include:

After a nationwide search, the NSF reportedly chose North Carolina because of its proximity and connection to area research universities and supportive municipalities. Aerial Experimentation and Research Platform for Advanced Wireless will be led by NC State University, in partnership with Wireless Research Center of North Carolina, Mississippi State University, and Renaissance Computing Institute; additionally partnering with Town of Cary, City of Raleigh, North Carolina Department of Transportation, Purdue University, University of South Carolina, and many other academic, industry and municipal partners. 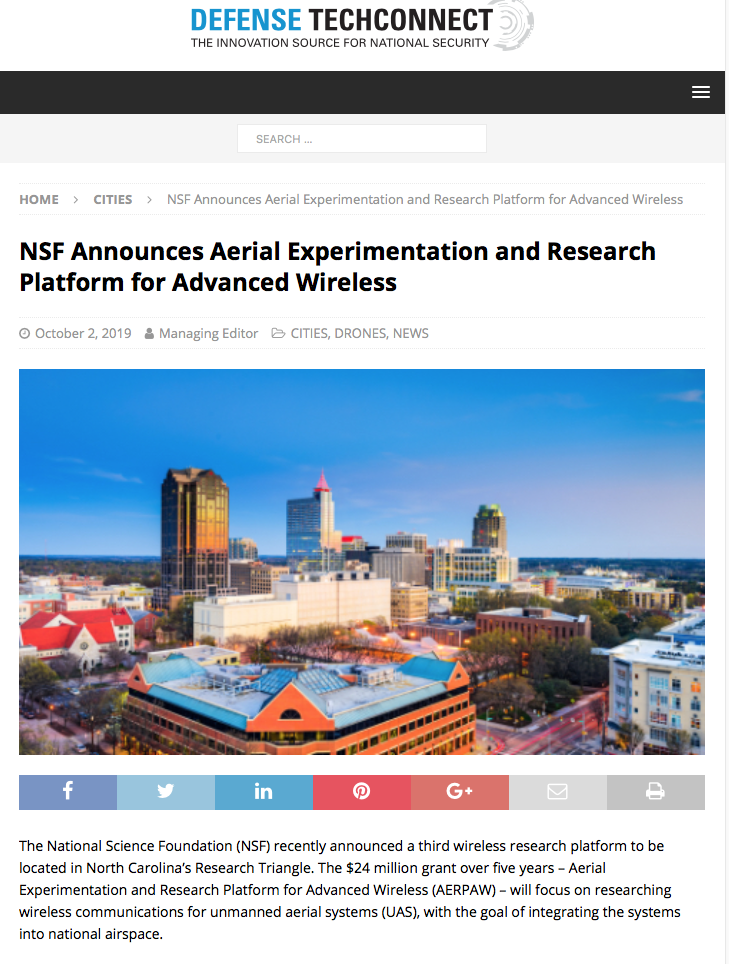 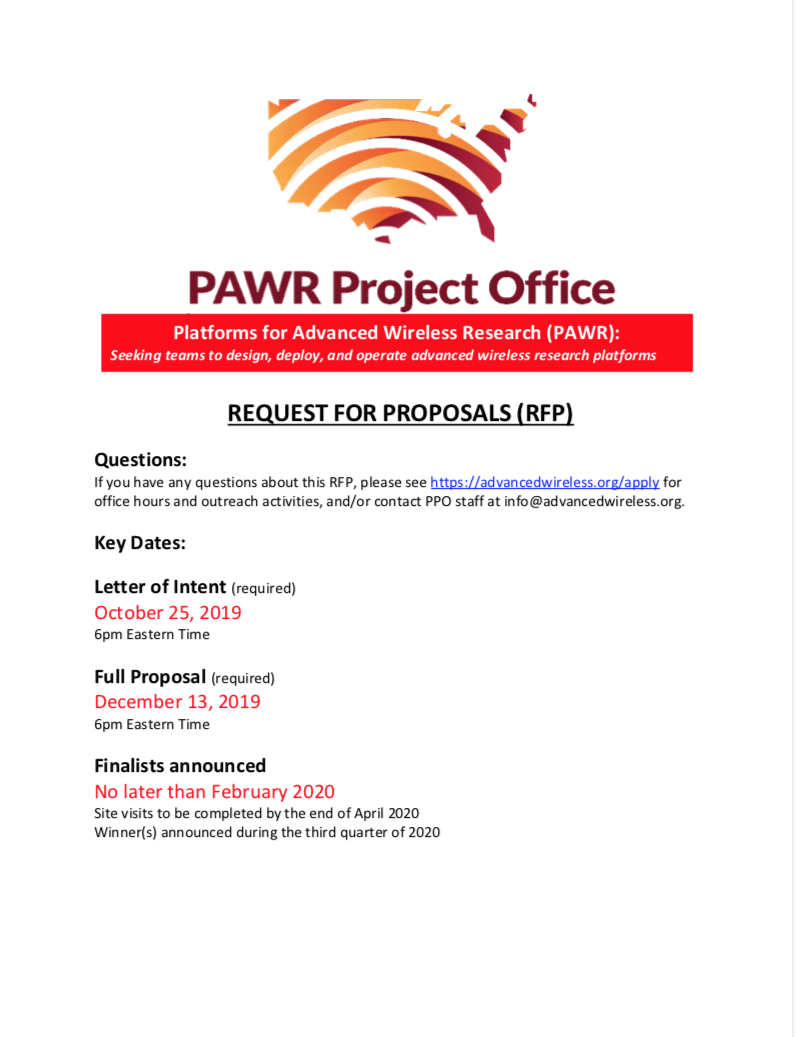 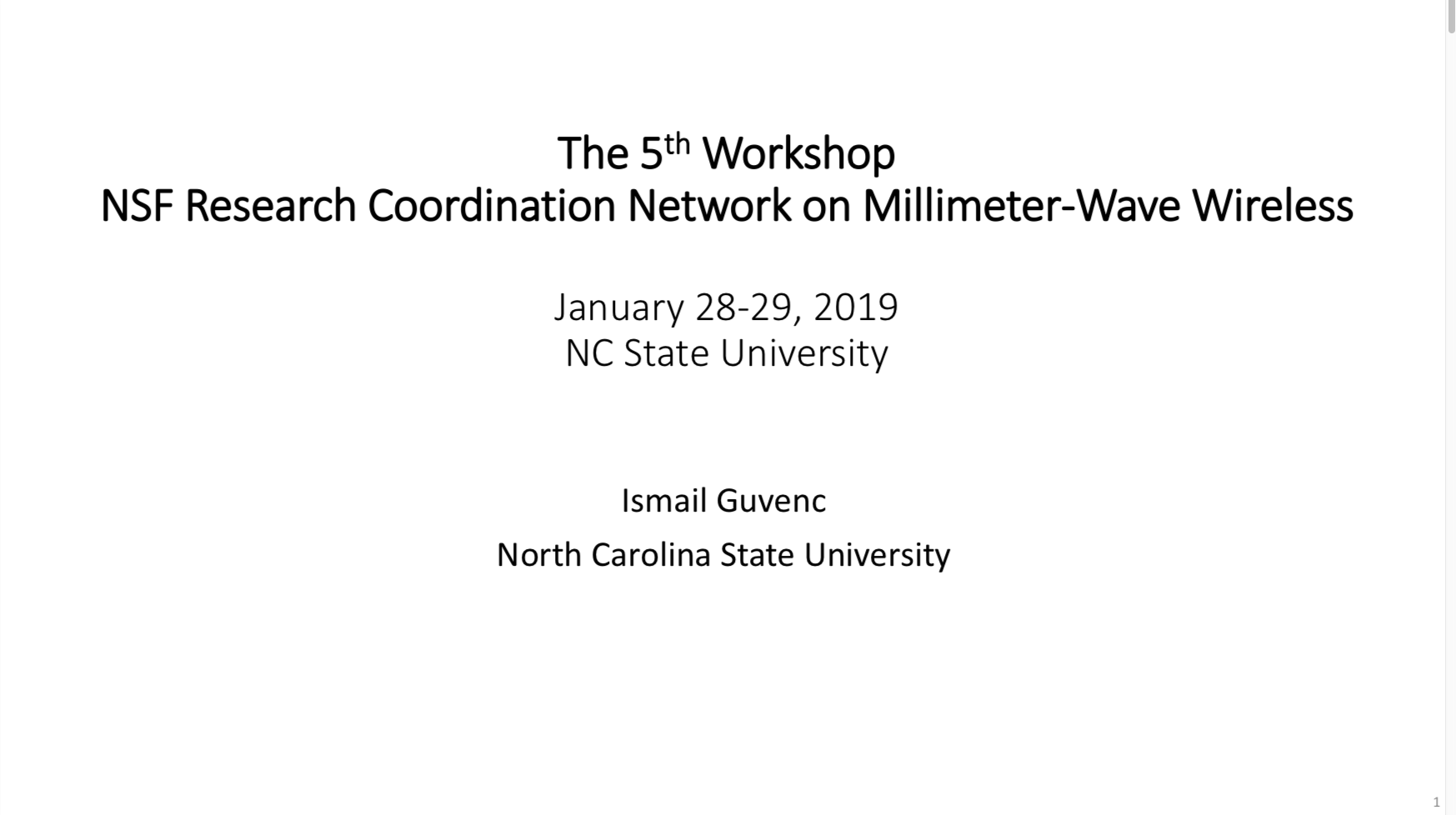