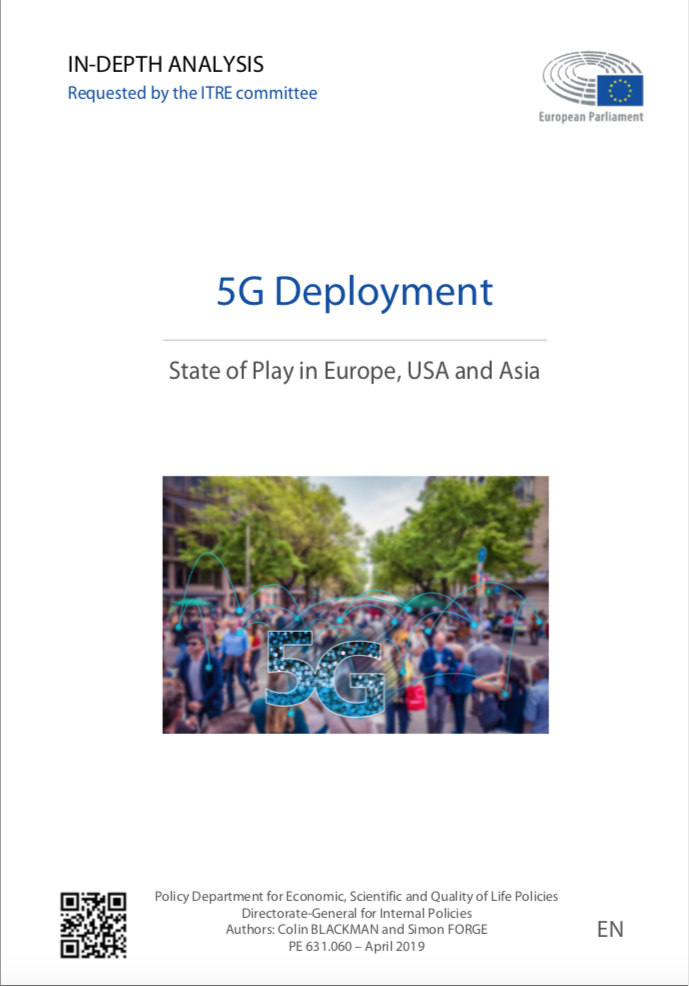 This in-depth analysis was prepared by Policy Department A at the request of the ITRE Committee*. It compares 5G deployment in the EU with other leading economies – the USA, China, Japan, the Republic of Korea, Singapore and Taiwan. On a range of indicators, the EU compares well. However, this is not a short-term race. 5G is more complex than previous wireless technologies and should be considered as a long-term project to solve technical challenges and develop a clear business case.

* The European Parliament’s Committee on Industry, Research and Energy (ITRE)

On a range of technical and other criteria, Europe compares well with other leading countries and economies in 5G development, such as the USA, China, Japan, the Republic of Korea, Singapore and Taiwan. In analysing the market and the positions of the various national players, it is helpful to classify countries and economies either as producers of 5G technology (e.g. Korea, Taiwan), consumers of 5G technologies (e.g. Singapore), or both. Europe falls in the latter category, along with the USA, China and Japan.

In fact, in many ways, European consortia are well placed, with an advanced programme in pilots, city trials and testing, and consensus on spectrum allocation and assignment. It also has some key strategic advantages compared to some other countries. For example, it is home to significant equipment suppliers (e.g. Nokia and Ericsson) as well as various key integrated circuit designers (e.g. ARM/Softbank) despite ownership by Japanese, US or Chinese enterprises. Furthermore, the key technical standards organization, ETSI/3GPP, is located in the EU and is at the centre of intelligence for the technologies, standards and the patents on which they are based. It is becoming clear that 5G will cost much more to deploy than previous mobile technologies (perhaps three times as much) as it is more complex and requires a denser coverage of base stations to provide the expected capacity.

The European Commission has estimated that it will cost €500 billion to meet its 2025 connectivity targets, which includes 5G coverage in all urban areas. As 5G is driven by the telecoms supply industry, and its long tail of component manufacturers, a major campaign is under way to convince governments that the economy and jobs will be strongly stimulated by 5G deployment. However, we are yet to see significant “demand-pull” that could assure sales. These campaign efforts are also aimed at the MNOs but they have limited capacity to invest in the new technology and infrastructure as their returns from investment in 3G and 4G are still being recouped. The notion of a “race” is part of the campaign but it is becoming clear that the technology will take much longer than earlier generations to perfect. China, for instance, sees 5G as at least a ten-year programme to become fully working and completely rolled out nationally. This is because the technologies involved with 5G are much more complex. One aspect, for example, that is not well understood today is the unpredictable propagation patterns that could result in unacceptable levels of human exposure to electromagnetic radiation.

Thank you to AH for sharing this article with us @ Z5G!