IN THE SENATE OF THE UNITED STATES 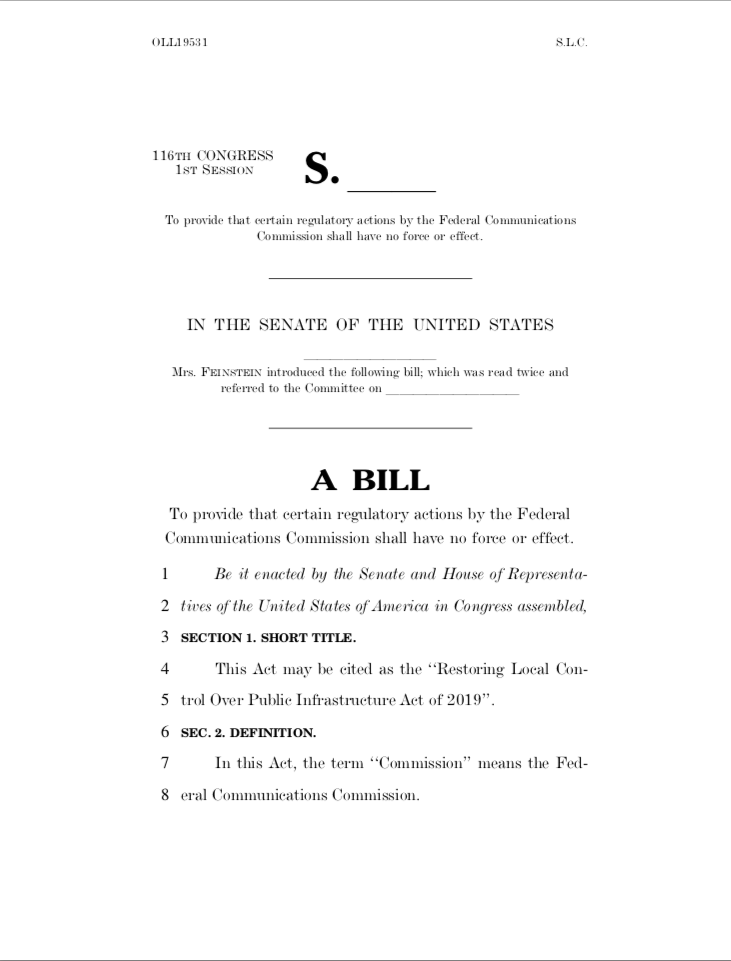 PRESERVATION OF RIGHTS OF STATE AND LOCAL  GOVERNMENTS.

On June 27, 2019, some of the leading Senators in Congress submitted a Bill – S. 2012 to restore local control over the deployment of 5G and abolish FCC regulations.

The Bill aims to abolish 3 the following regulatory actions adopted by the Federal Communication Commission and declares then as having “no force or effect”.

While these bills are very much welcomed they still do not address the most important issue – the health effects of this technology. When will a Congressman will introduce a bill to overturn Section 704 of the Telecommunication Act of 1996 and or to amend it to clarify that ‘Environmental Considerations’ do not include ‘Health’ considerations.

IMPORTANT – TO ANYONE WHO WORKS WITH MUNICIPALITIES ON ORDINANCES

Please be aware that according to Next Century Cities analysis of compliance with the Sept. 26 FCC Regulations, titled Summary of Final FCC Small Cell Order municipalities should insert a clause into their agreement with a carrier or infrastructure provider that voids the agreement or requiring  its modification, in the event of a regulatory change (including the overturning of the Order).

Following is the exact text from the document:

If a city enters into an agreement with a carrier and then the Order is overturned, is the city stuck with the agreement?

The answer in general is yes. No city is required to enter into any agreement with a carrier or infrastructure provider. If a city does so voluntarily, it will almost certainly be held to the terms of the agreement by a court. However, a city might be able to resolve this problem by including in the agreement a clause voiding the agreement or requiring its modification, in the event of a regulatory change (including the overturning of the Order). Many types of telecommunications agreements contain such regulatory change clauses because parties recognize that the wording or scope of specific provisions in the agreement has been dictated by the then-existing telecommunications regulatory scheme, and should be changed if the regulations change.

Link To Article @ We Are The Evidence

Thank you To KK for sharing this info with us at Zero5G.com!