The weather is a complex thing — and forecasting it, an equally complex science.

Predicting the weather needs a lot of data to build into models which then improve over time. The system learns how many different factors come together to bring us the weather we experience on a daily basis.

Typically, the bulk of the world’s forecasting has been under the government’s domain. This trend has now changed as data has become accessible and private agencies have acquired computing power to run extremely complex models in minutes from anywhere in the world.

Computing power is now readily available for anyone to access in the cloud, and startups can now gather climate data in many ways. A Boston and Tel Aviv-based startup, ClimaCell, is setting out to prove just that: non-traditional technology to generate forecasts that can give accurate predictions in a given city. 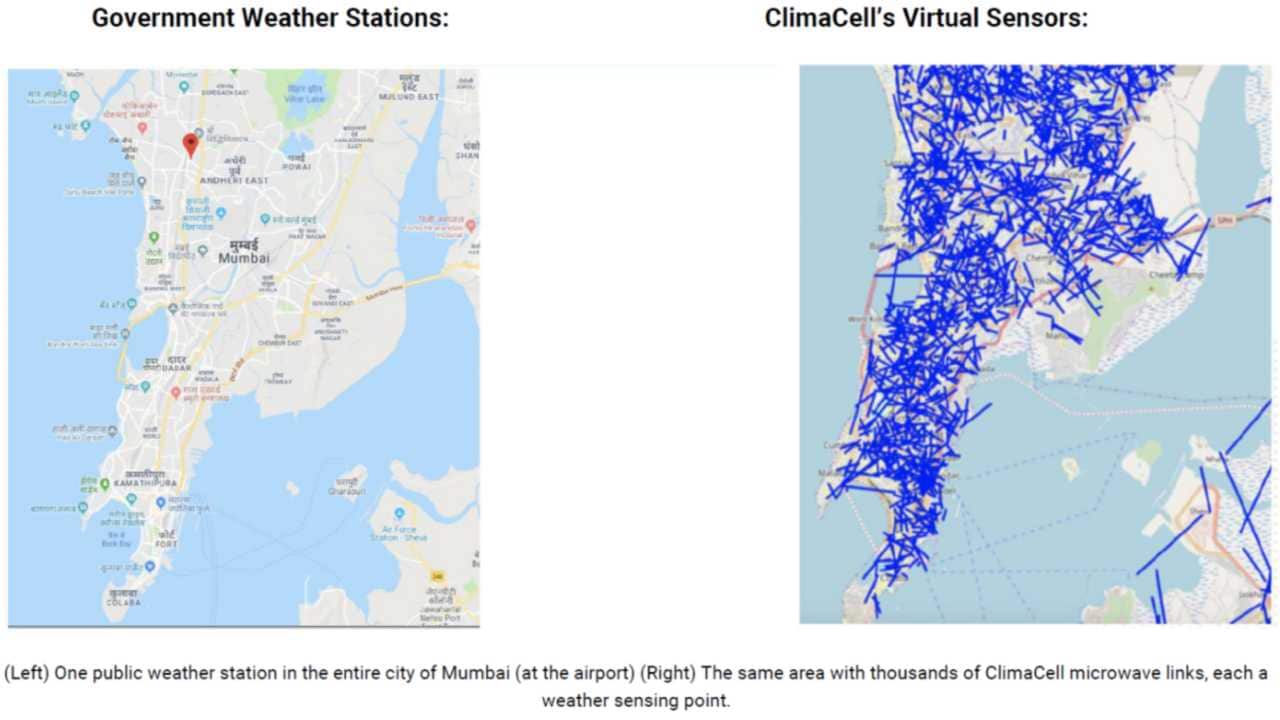 How the microwave sensors work for the city of Mumbai. Image: ClimaCell

Worldwide, extreme weather resulted in at least 5,000 lives lost in 2018, and left 28.9 million in need of emergency aid. With unprecedented changes in the weather from climate change and a lot of cities to monitor, big data holds a lot of promise in outsmarting the elements to help make forecasts as accurate as possible. This also applied to places that haven’t traditionally had access to weather monitoring.

India, like many other countries in the developing world, has a pretty low penetration of tools to monitor weather locally. This is one of the reasons the country is particularly vulnerable to damage from unexpected floods and vicious monsoons. The impacts of long-term weather fluctuations could cost India up to 2.6 percent of its GDP by 2050, and has already cost India $80 billion since 1997, according to the World Bank.

ClimaCell certainly isn’t the first firm to opt for a non-mainstream approach, but it is a very different one. It holds promise to monitor weather remotely and accurately from half a world away. The biggest challenge to technology is a lack of diversity in data, according to ClimaCell CEO Shimon Elkabetz.

“The biggest problem is that to predict the weather, you need to have observations and you need to have models,” Elkabetz told TechCrunch. “The entire industry is basically repackaging the data and models of the government [agencies]. And the governments don’t create the relevant infrastructure everywhere in the world… even in the US, there’s room for improvement.”

Breaking that norm is what sets ClimaCell’s approach apart, in what could be the start of a wave of private companies entering weather monitoring.

Instead of relying on government sensors, ClimaCell is using the Internet of Things to gather weather data from places far and wide, which otherwise wouldn’t be possible. With IoT data, devices like cell phones, connected vehicles, street cameras, airplanes can double as sensors that act like tiny, virtual weather stations.

If a driver in Mumbai turns on a windshield wiper, that must mean it’s probably raining. Cars can also relay temperature data. If the view from a street camera in Kerala shows rain, it’s raining. That isn’t all that makes ClimaCell’s approach different. The startup is also working on detecting changes in cell phone signals between phones and towers due to atmospheric conditions. It is also gathering similar data from the strength of satellite-to-ground microwave signals.

“The idea is that everything is sensitive to weather and we can turn everything into a weather sensor,” Elkabetz told TechCrunch. “That’s why we call it the weather of things. It enables us to put in place virtual sensors everywhere.”

All this data feeds into real-time weather forecasts that ClimaCell metes out to its customers — from airlines to rideshare launch companies like SpaceX to energy companies. The company also recently launched a flood alert system for 500 cities, providing 24 to 48-hour warnings ahead of major floods. The company combined its weather data with an in-house hydrological model to make this happen.

The company has so far been working entirely with other businesses but plans to launch a consumer app in May this year.

Tech2 is now on WhatsApp. For all the buzz on the latest tech and science, sign up for our WhatsApp services. Just go to Tech2.com/Whatsapp and hit the Subscribe button.