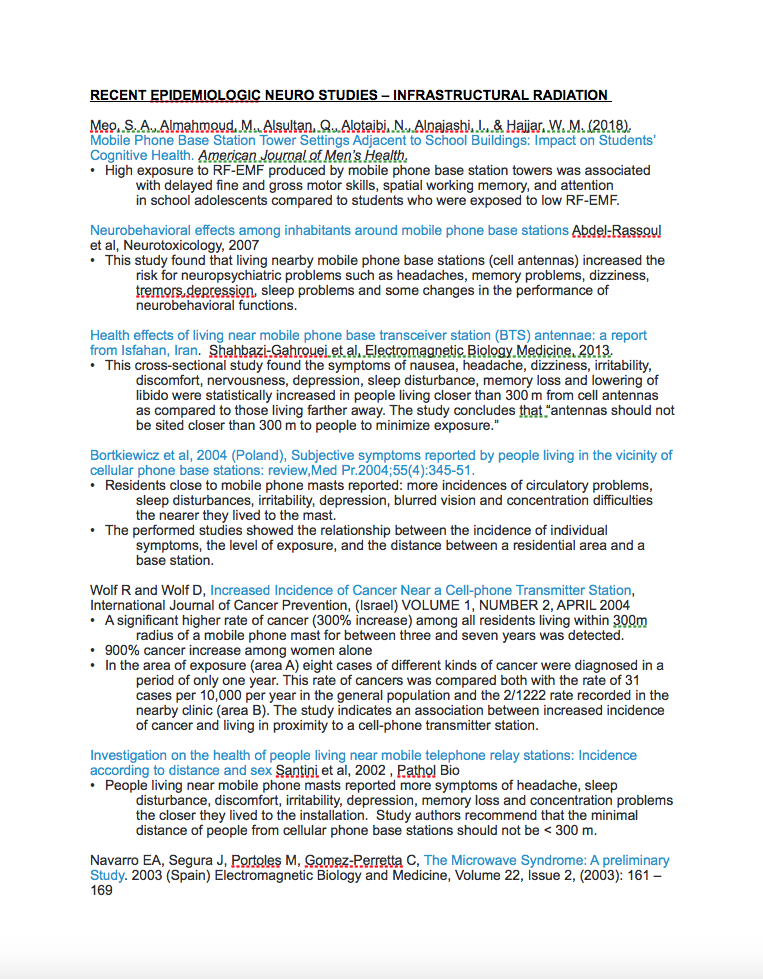 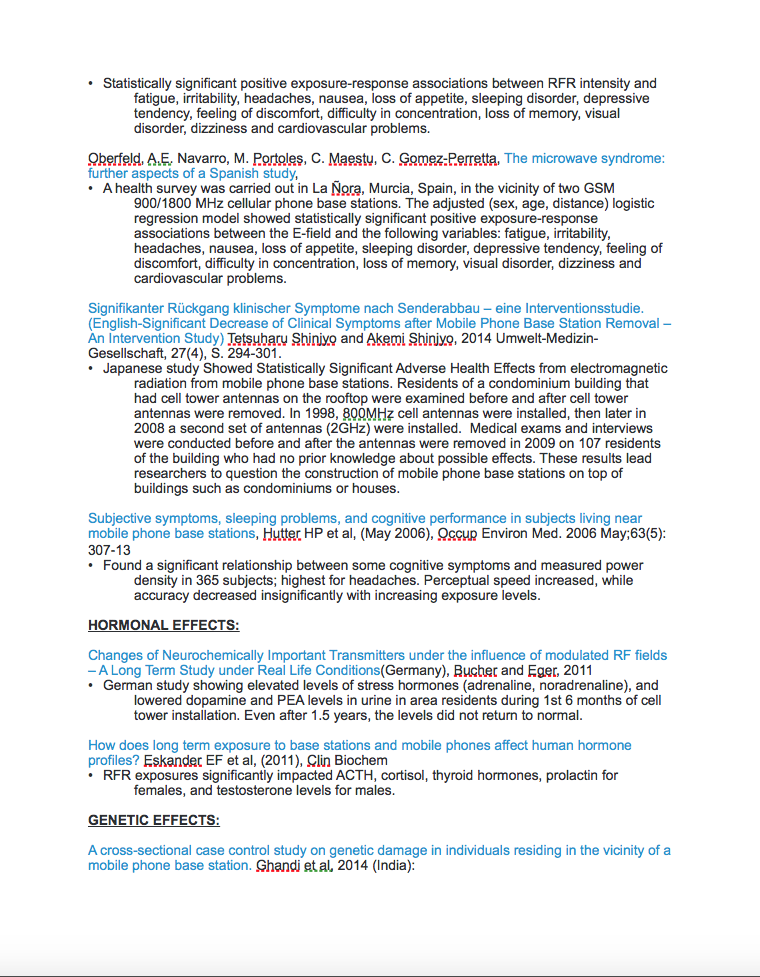 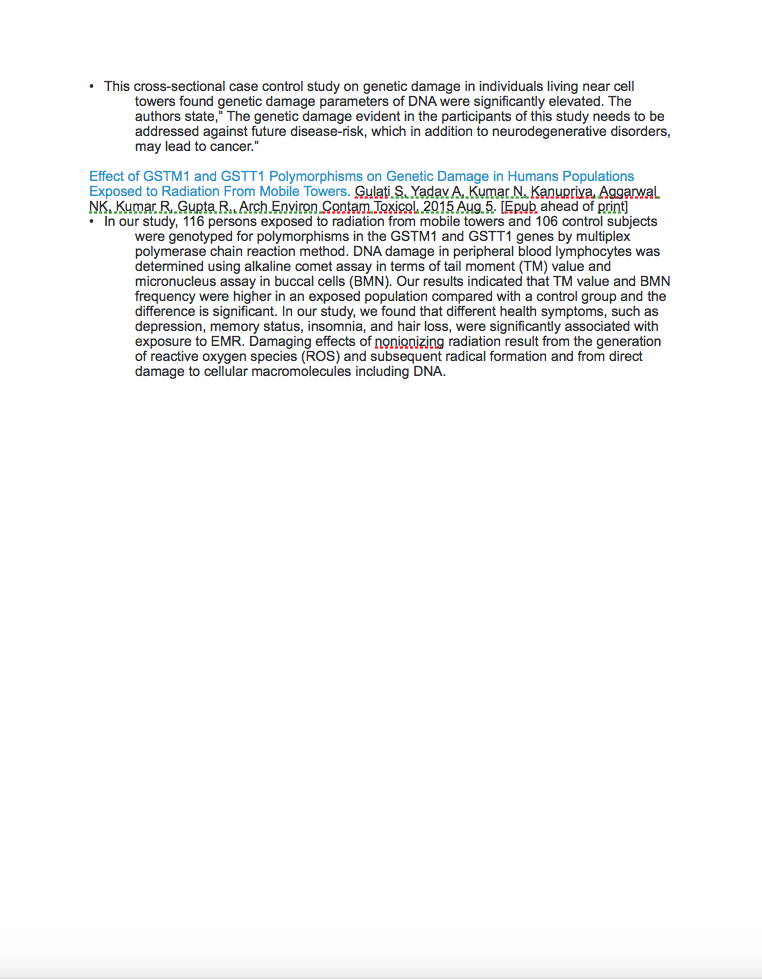 High exposure to RF-EMF produced by mobile phone base station towers was associated with delayed fine and gross motor skills, spatial working memory, and attention in school adolescents compared to students who were exposed to low RF-EMF.

This study found that living nearby mobile phone base stations (cell antennas) increased the risk for neuropsychiatric problems such as headaches, memory problems, dizziness, tremors,depression, sleep problems and some changes in the performance of neurobehavioral functions.

This cross-sectional study found the symptoms of nausea, headache, dizziness, irritability, discomfort, nervousness, depression, sleep disturbance, memory loss and lowering of libido were statistically increased in people living closer than 300 m from cell antennas as compared to those living farther away. The study concludes that “antennas should not be sited closer than 300 m to people to minimize exposure.”

The performed studies showed the relationship between the incidence of individual symptoms, the level of exposure, and the distance between a residential area and a base station.

A significant higher rate of cancer (300% increase) among all residents living within 300m radius of a mobile phone mast for between three and seven years was detected.

In the area of exposure (area A) eight cases of different kinds of cancer were diagnosed in a period of only one year. This rate of cancers was compared both with the rate of 31 cases per 10,000 per year in the general population and the 2/1222 rate recorded in the nearby clinic (area B). The study indicates an association between increased incidence of cancer and living in proximity to a cell-phone transmitter station.

Investigation on the health of people living near mobile telephone relay stations: Incidence according to distance and sex Santini et al, 2002 , Pathol Bio

People living near mobile phone masts reported more symptoms of headache, sleep disturbance, discomfort, irritability, depression, memory loss and concentration problems the closer they lived to the installation.  Study authors recommend that the minimal distance of people from cellular phone base stations should not be < 300 m.

Japanese study Showed Statistically Significant Adverse Health Effects from electromagnetic radiation from mobile phone base stations. Residents of a condominium building that had cell tower antennas on the rooftop were examined before and after cell tower antennas were removed. In 1998, 800MHz cell antennas were installed, then later in 2008 a second set of antennas (2GHz) were installed.  Medical exams and interviews were conducted before and after the antennas were removed in 2009 on 107 residents of the building who had no prior knowledge about possible effects. These results lead researchers to question the construction of mobile phone base stations on top of buildings such as condominiums or houses.

Changes of Neurochemically Important Transmitters under the influence of modulated RF fields – A Long Term Study under Real Life Conditions(Germany), Bucher and Eger, 2011

German study showing elevated levels of stress hormones (adrenaline, noradrenaline), and lowered dopamine and PEA levels in urine in area residents during 1st 6 months of cell tower installation. Even after 1.5 years, the levels did not return to normal.

A cross-sectional case control study on genetic damage in individuals residing in the vicinity of a mobile phone base station. Ghandi et al, 2014 (India):

This cross-sectional case control study on genetic damage in individuals living near cell towers found genetic damage parameters of DNA were significantly elevated. The authors state,” The genetic damage evident in the participants of this study needs to be addressed against future disease-risk, which in addition to neurodegenerative disorders, may lead to cancer.”

In our study, 116 persons exposed to radiation from mobile towers and 106 control subjects were genotyped for polymorphisms in the GSTM1 and GSTT1 genes by multiplex polymerase chain reaction method. DNA damage in peripheral blood lymphocytes was determined using alkaline comet assay in terms of tail moment (TM) value and micronucleus assay in buccal cells (BMN). Our results indicated that TM value and BMN frequency were higher in an exposed population compared with a control group and the difference is significant. In our study, we found that different health symptoms, such as depression, memory status, insomnia, and hair loss, were significantly associated with exposure to EMR. Damaging effects of nonionizing radiation result from the generation of reactive oxygen species (ROS) and subsequent radical formation and from direct damage to cellular macromolecules including DNA.

Thank you to SC for contributing these studies for our scientific research archives at ZERO5G!