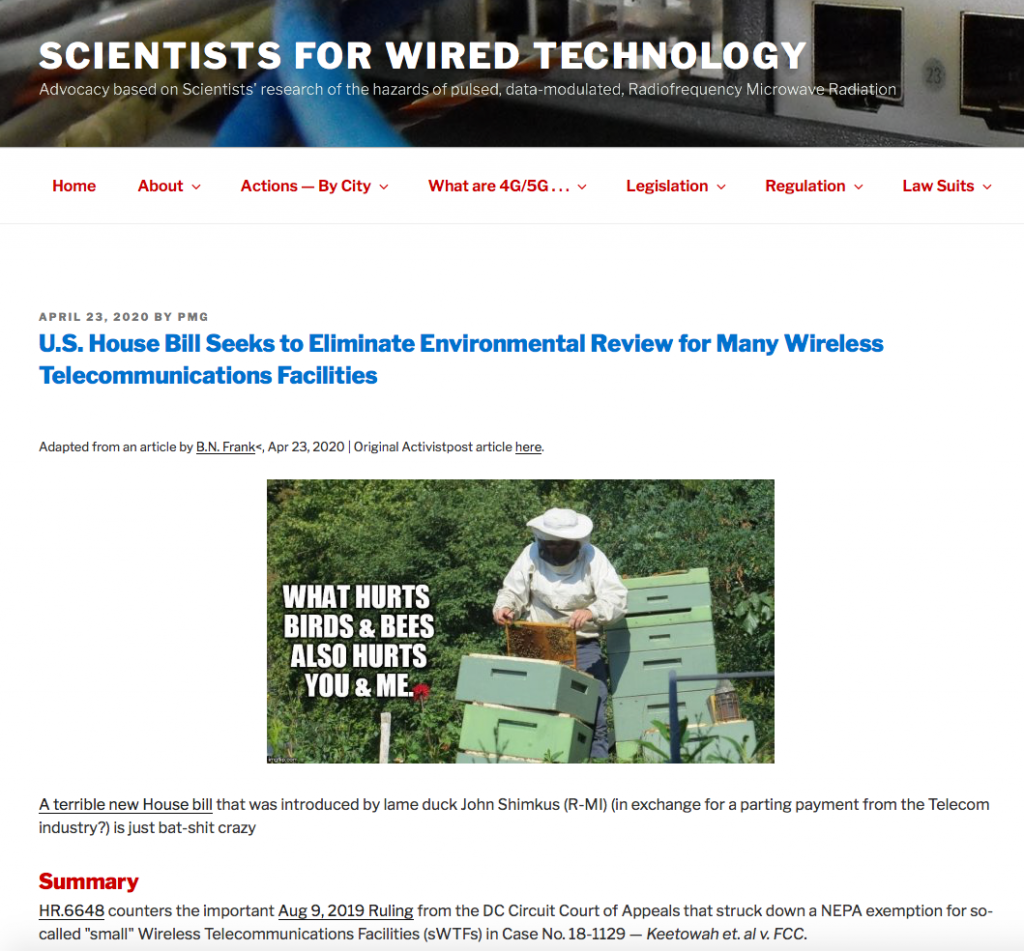 This Wireless industry-friendly bill has been introduced in the US House of Representatives says that the FCC does not need to perform any environmental review for Densified 4G and 5G and sWTF under the National Environmental Policy Act.

The FCC shall not be required to perform, and may not require any entity regulated by the Commission to perform, any review under such Act or division as a condition of permitting the placement and installation of a communications facility if the new facility —

The bill, HR 6488, will undo last year’s historic ruling that vacated the FCC’s decision to do away with NEPA review of small cell deployments. Representative John Shimkus of Illinois introduced the bill which has now been referred to the Committee on Energy and Commerce, and in addition to the Committee on Natural Resources.

This bill would directly reverse the August 2019 decision by the US Court of Appeals for the District of Columbia Circuit which halted the efforts of the Federal Communications Commission to expedite the deployment of 5G technology. The FCC had issued an order in March 2018 eliminating environmental and historic preservation review for Wireless Telecommunications Facilities (WTFs) of any G and of various sizes. The FCC had reasoned that even though the industry planned to deploy as many as 800,000 of these 50-foot (or taller) towers in neighborhoods and historic districts around the country, it was not in the public interest to review their potential impacts. The Natural Resources Defense Council, several Native American Tribes and intervenor Edward B. Myers appealed FCC Order 18-30 and won. In 2019 the Court found that the FCC had failed to adequately address the harms of its deregulatory efforts and failed to address the benefits of environmental and historic preservation review.

This 2020 bill seeks to reverse that historic win.

Take action and contact  US Senators and House Representatives

WE DO NOT CONSENT.  CALL TO OPPOSE Anti-Environment/Anti-Health Bill — H.R. 6488;

Let your Representative and Senator know that you do not consent to hazardous environmental contamination by radiofrequency microwave RF/MW radiation transmissions from telecommunications facilities (4G-5G), or involuntary exposure to harmful wireless radiation deployment via infrastructure.

The People have already paid for, and want safe, fast, reliable, and cyber secure fiber optic cable all the way to the premises, not constant exposure to hazardous transmissions of wireless radiofrequency microwave RF/MW radiation (4G-5G).

(3) 4G is the backbone of 5G, we know it is harmful, as our military uses RF/MW radiation as weaponry and crowd control. Let’s stop this silent and invisible pollution war on people, nature, and the environment!

(4) Bees, birds and pollinating insects are absolutely vital pollinators in growing food and must be protected from deadly exposures to radiofrequency microwave RF/MW radiation emissions.

“An Act to amend the Public Health Service Act to provide for the protection of the public health from radiation emissions from electronic products.”